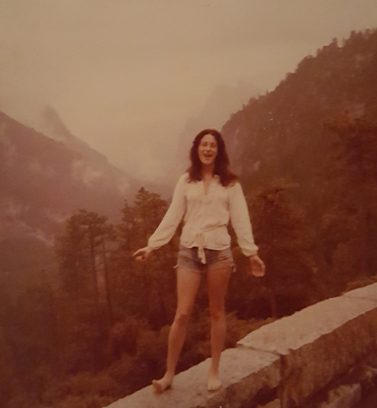 It was the year of 1976 when I flew out to San Francisco to explore the west coast and find a life for myself…a life that would take me venturing out amongst the high cliffs of the Pacific Ocean, or crossing the Golden Gate Bridge, taking a bus to the Mission district and shopping in all of the glorious thrift shops or sometimes traveling with a girlfriend named Mae.  I met Mae along with her boyfriend and on occasion she and I would take off in her little raggedy car and drive up the coast towards Oregon. Stopping in quaint little towns…walking the beaches.   At night we would sleep out under the stars and would return back to the city…beautiful San Francisco…to jobs, boyfriends and to establishing a home for myself.

I lived in what is known as the Haight Ashbury district.  An area of town that had a hopping night life, flower children with flowers in their hair, barefoot hippies and music venues with well known artists…peace & love.  The height of it all was now long gone…it was much quieter now in 1976.

Yosemite National Park is not far from the city of San Francisco just laying to the southeast.  It was after all where the Redwood trees grew and that was something I wanted to behold…but alas…little did I know about altitude sickness!  Taking in all of the magnificent sights of Yosemite during the day, when darkness fell within the park it was time to figure out where we would sleep for the night…so we pulled over on the road and slept in the car!  I remember not sleeping much…I sickly stumbled out of the car…all night long!  I now know it was due to the higher altitudes that I was not acclimated to.  Now…40 years later, I will once again venture to San Francisco…this time I will travel by train to Yosemite National Park to explore this vast wilderness…by foot.

My sister, Tiger Lily and myself will hike the 220 mile John Muir Trail which begins within Yosemite at what is known as Happy Isles.  We are fully equipped for this…meaning our packs are way too heavy!  Gear I am not used to carrying on a backpacking trip…micro spikes, bug nets and a 2.9 pound bear vault to carry all of our foods and sweet smelling toiletries in an attempt to keeping the bears from stealing our grub!

I will try to write on this blog often and try to keep you on the edge of your seats while we climb Half Dome, ford Bear Creek, cross snowy and icy mountain passes and ferry over to the Vermillion Valley Resort.  Stop by and read up on our adventure!

Oh yea…eating the spice of Ginger, keeping hydrated, day hiking a few days to allow ourselves to become acclimated and taking meds…anything and everything to calm down the altitude sickness.  That monster is not welcome on this trip!